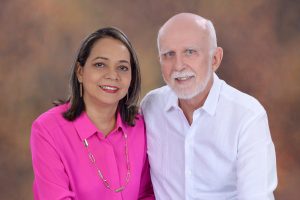 In the early years in Colombia Glenn taught at two different Christian Missionary kids high schools, first on the southern plains of Colombia and then in Bogotá the capitol city. Glenn and Patty met in Bogotá in 1997 and were married a year later. They have an adopted daughter, Candy, working and studying in San Diego. Glenn is a graduate of La Verne University; Coleman College and San Diego Christian College. Patty has a BA in Publicity from the University Jorge Tadeo Lozano in Bogotá.

In 2005, after a six month furlough in San Diego, Glenn, Patty and Candy moved from Bogotá to Santa Marta, Colombia. God’s calling was to plant a church in Patty’s ancestral home, Santa Marta. After bible studies in various homes, the church, Aposento Alto de Santa Marta, (The Upper Room of Santa Marta) held its first service in April.

In May 2016 the church moved to a new larger location. The new location is better suited for a church and associated ministries than was the previous location. The church is involved in the community through a kids outreach ministry called “Semilla de Trigo” (Seed of Wheat), where a team meets each Saturday with 30-45 kids (4-14 years old) for games, bible study and refreshments. The church also has small groups meeting in homes for bible study; a youth ministry, and various adult bible studies during the week.

Support the Work of Glenn & Patricia Davis Below

(Note: Donations are made in multiples of $10. Increase quantity to donate more. For example, a donation of $50 would be a quantity of 5 at checkout)